I have decided to affectionately refer to my green smoothies as “Shrek Juice”. This morning I made a special batch of Shrek Juice (SJ) to take to work with me. Today’s SJ was made with banana, pineapple (the not pretty part that you don’t want to eat, but is a waste to throw it away), including pineapple core (or pineapple hearts), frozen strawberries, frozen mangos, carrot, grape tomatoes and and the “Shrekiest” of ingredients—a generous handful of spinach! 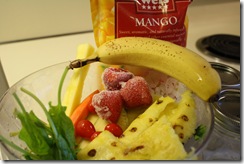 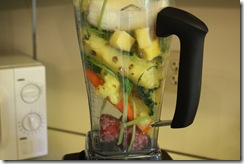 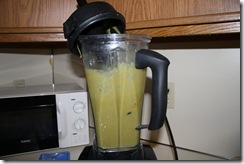 As you can see, I definitely made enough to share. So, I packaged it up for my bike ride to work by pouring the SJ into pint-sized Ball jelly jars. I then put the jars into a insulate cooler (that I scored the other day for free from the University career fair—which I likely didn’t have business visiting). 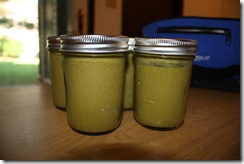 The SJ made it through the bike ride (I was so afraid the jars would crash together and break and I’d have a horrible mess. I guess I don’t ride quite that fast after all.) The real reason I wanted to bring the SJ to work, is because I wanted to bring some to the mailman on campus. I frequent his establishment about once every 10 days or so mailing off packages to my sister and BIL in Afghanistan. Our mailman loves to receive baked goods and he has been teasing me to make him something. Well, I don’t know how we got to talking about it, but somehow we ended up talking about the Vitamix. He was intrigued and asked me to tell him more. So, I shared with him some of my recent kitchen experiments with the VM (strawberry ice cream, cinnamon-honey butter, homemade soy milk, and the green smoothies). He had me write down the name of the blender and my contact information. So, I decided that I would bring him some just so he could see for himself how yummy SJ is. Well, I had enough to share with my co-workers and surprisingly they loved it and even asked for seconds. I had planned to share 3 of my 5 jars and drink two of them myself. Yeah, that didn’t happen. I only got 1 jar to myself. Now, I must say that my co-workers are all in nutrition, so I’m not quite sure that they have the most unbiased opinions. I will say though they are true foodies and wouldn’t eat or drink anything they didn’t like. So, I’m hopeful that it’s not just me that thinks Shrek Juice is delish…and not to mention packed full of macro- and micronutrients. Oh, to follow-up with my mailman story. I delivered the SJ to him this morning as soon as I arrived on campus. He had a line full of people, so I couldn’t wait around for his opinion. I told him I would be back tomorrow to pick up my jar. Well, guess who called me tonight? The mailman! He called to ask for the recipe. He said he brought home the SJ because he wanted to share it with his bride. They both thought it was tasty and wanted to recipe. I will bring it to him tomorrow…and if he’s lucky, maybe with a fresh jar of Shrek Juice!

Well, you know its not a normal day unless I use my VM more than once per day. I bought some frozen blueberries yesterday and remembered that I had a tiny bit of heavy cream left that I needed to use up. So, I thought tonight would be the perfect night for a batch of blueberry ice cream! 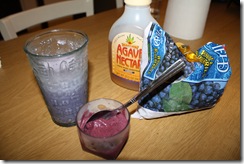 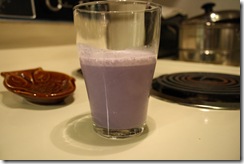 It was so rich and not overly sweet. I wanted to share some with some dear neighbors of mine—one of who has type I diabetes, so instead of the usual white sugar that I add to my ice creams, I used a tiny bit of agave nectar to give it a hint of sweetness. They seemed to love it and were amazed at how quick it is to make. Oh the glass of “purple juice” is blueberry milk. After making the ice cream, there was still delicious bits of the ice cream on the walls of the VM jar, so I poured in some milk and blended all that blueberry goodness into a glass of milk! Waste not, want not.

Click on the Vitamix button below for free standard shipping or use code (06-005573) at checkout.

Read posts from the past